An LED lamp is a light-emitting diode (LED) product which is assembled into a lamp (or light bulb) for use in lighting fixtures. 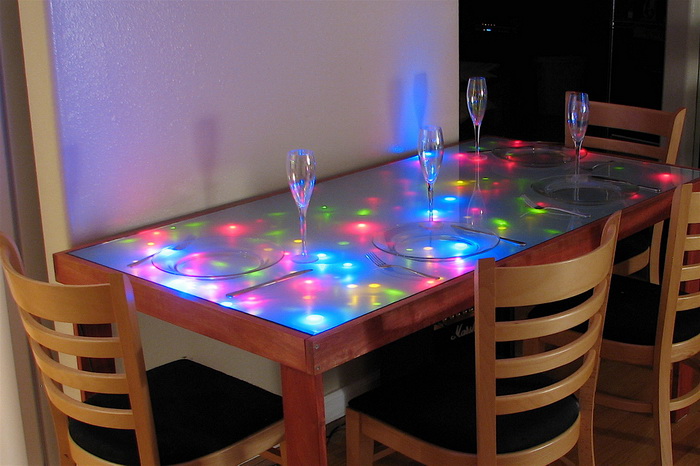 LED lamps have a lifespan and electrical efficiency which are several times longer than incandescent lamps, and significantly more efficient than most fluorescent lamps, with some chips able to emit more than 300 lumens per watt (as claimed by Cree and some other LED manufacturers).

The LED lamp market is projected to grow by more than twelve-fold over the next decade, from $2 billion in the beginning of 2014 to $25 billion in 2023, a compound annual growth rate (CAGR) of 25%. As of 2016, LEDs use only about 10% of the energy an incandescent lamp requires. 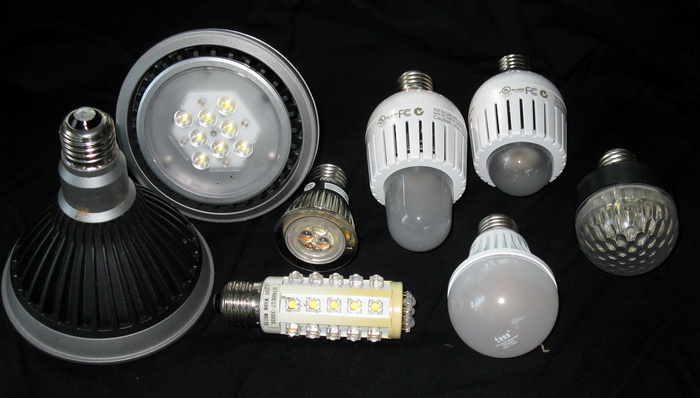 The initial cost of LED is usually higher. Degradation of LED dye and packaging materials reduces light output to some extent over time.

Some LED lamps are made to be a directly compatible drop-in replacement for incandescent or fluorescent lamps. 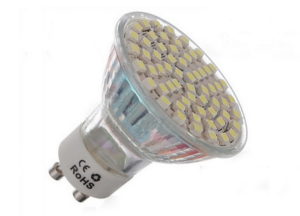 Most LEDs do not emit light in all directions, and their directional characteristics affect the design of lamps, although omni-directional lamps which radiate light over a 360° angle are becoming more common.

The light output of a single LED is less than that of incandescent and compact fluorescent lamps; in most applications multiple LEDs are used to form a lamp, although high-power versions are becoming available.

LED chips need controlled direct current (DC) electrical power; an appropriate circuit which is normally called as LED driver is required to convert alternating current from the supply to the regulated voltage direct current used by the LEDs.

LEDs are adversely affected by high temperature, so LED lamps typically include heat dissipation elements such as heat sinks and cooling fins.

LED drivers is the essential component of LED lamp or luminaire. Good LED drivers can guarantee a long life time of LED systems and provide additional features such as dimming and control.

In 2016, General Electric announced the phase out of CFL production. LED prices had dropped steadily, falling well below $5 for a basic bulb in 2015. As a result, customers had been migrating toward LEDs.

CFLs were also having difficulty qualifying for the Energy Star rating under newer regulations.

Eskom used to be the most efficient power producer in the world, but is now struggling to keep the lights on. Here is how it was destroyed.
View on Facebook
· Share

Independent energy expert Ted Blom says he expects load shedding to be a reality for the next five years, painting a grim picture about the current bout of energy shortages South Africa finds itself i...
View on Facebook
· Share

Eskom warns of more loadshedding for the week ahead

In a statement on Sunday, Eskom said loadshedding will be reduced to Stage 1 from 11pm tonight until 5am tomorrow morning and then Stage 2 thereafter.
View on Facebook
· Share

Norwegian vessel owner Solstad Offshore has been awarded a contract with a large international contractor for the CSVs Normand Navigator, Normand Frontier and Normand Australis.
View on Facebook
· Share

Airline passengers are checking into the first solar powered airport in Africa. Solar energy makes a lot of sense in South Africa, which enjoys year round su...

Why solar power is spreading so fast in Africa | The Economist ... See MoreSee Less

Why solar power is spreading so fast in Africa | The Economist

Africans have been waiting for decades for the mains electricity which the rich world takes for granted. Sub-Saharan Africa’s 910m people consume less electr...

An ongoing energy crisis in South Africa is impacting the livelihoods of millions of people. While widespread blackouts are costing the country millions, the...
View on Facebook
· Share

The company behind the turbine claims a single spin of it could power a home for two days. Get the details here.
View on Facebook
· Share

This is an ingenious creation that could totally change the way we produce energy, reuse food waste, and design architecture.
View on Facebook
· Share

It says a lot that the Admin is creating the first ever Deputy Director of Energy Justice position.

It says way more that they hired Shalanda Baker to do the job.

One of the most inspiring leaders I’ve had the joy to know.

Feeing so much hope.

Restarted our LinkedIn to protect solar in 2021 - take a look!

How a rural Ohio town is leading the way in clean energy http://s.einnews.com/d6L7BWW7BL

We are answering your #AskNASA questions live on @NASA TV during a spacewalk briefing on Friday at 3pm ET. @Astro_illini and @AstroVicGlover will work on upgrades outside the station on Jan. 27 and Feb. 1. https://www.nasa.gov/live

This lunar sample collected by @NASA_Astronauts in 1972 now sits in the Oval Office! 🇺🇸

It's on loan from the Lunar Sample Laboratory Facility at NASA's Johnson Space Center and serves as a reminder: We're going back to the Moon!